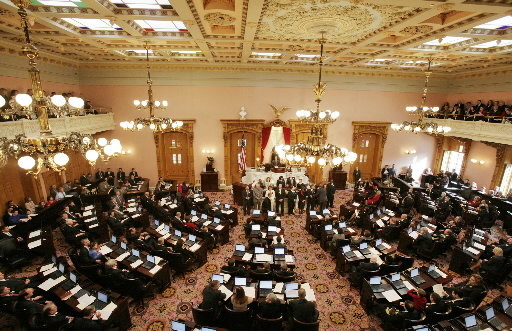 Legislative term limits not only remove successful legislators from their positions in the Ohio General Assembly but they bring with them ugly fights for the leadership positions that run the day to day operations of the Statehouse.  Some transitions are smooth and handled internally by members of the Ohio General Assembly usually through member votes on who will be the No. 2 to a leader soon to be departed.  Former Ohio Senate President Keith Faber had a smooth transition when term limits kicked him out of the Senate and now Ohio Senate President Larry Obhof took over the leadership helm.

The Ohio House of Representatives is not enjoy such a smooth transition.  Ohio House Speaker Cliff Rosenberger ends his four year term as Speaker in January, 2019.  His chosen successor, House Finance Committee Chairman Ryan Smith is in a political battle with former Ohio House Speaker Larry Householder for control of the Caucus.  The fight for this position has not stayed internal.  Instead, a slate of Householder supported candidates are running in a large number of Ohio Primary Elections all over the state.

The battle for Speaker of the Ohio House has also spilled into the news media.  Speaker Rosenberger has publicly endorsed candidates in the Primary Election and it is presumed Ohio House Republican Organizational Committee dollars are being spent to support those candidates.  It is not unusually for a caucus to support candidates in a Primary Election—incumbents are almost always supported and the Ohio Senate Republican Caucus has for years supported the candidate they deemed the strongest for open seats.  However, Representative Larry Householder has cried foul regarding the role of the House Republican Caucus in the current Primary battles across the state.  Most Statehouse pundits believe Representative Smith has the lead among the current elected members of the Ohio House Republican Caucus but there are still Primary and General Election races to survive.  There have even been media reports that Rep. Householder plans to go after Republicans in the General Election so the issue may not be solved until after the General Election.

Why is this battle happening? Term limits is the simple answer.   Fifteen states have term limits for the state legislators as indicated by the table below.

States with Term Limits are more prone to leadership battles that disrupt the legislative calendar and action on critical pieces of legislation.  As the table above illustrates, Term Limits are a reform movement of the 1990s and maybe the time has come to reverse this dangerous trend. According to the National Conference of State Legislators, Utah and Idaho have reversed Term Limits and the courts have thrown out state enacted Term Limits for different procedural legal reasons in Massachusetts, Oregon, Washington and Wyoming.  Maybe it is time for Ohio to reverse Term Limits and get back to the business of governing.