While May hopefully brings flowers from April showers, the month of May also provides 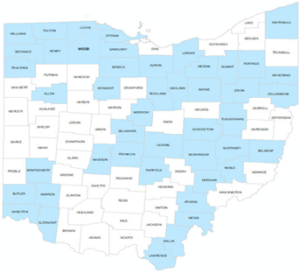 millions of dollars in funding opportunities for Ohio’s Transportation Improvement Districts (TIDs).  Ohio has 46 TIDs covering large areas of the state.  These intergovernmental agencies are designed to foster planning and cooperation among different counties and local governments to plan for regional transportation priorities.  TIDs have local, state and federal transportation funding sources upon which they can access.

The Ohio Transportation Review Advisory Council (TRAC) was established in 1997 to help ODOT develop and modify a project selection process which approves funding for the development of and construction of the Major New Capacity Program.  The TRAC defines Major New Capacity projects as those projects greater than $12 million which increase the capacity of a transportation facility or reduce congestion. All projects that cost ODOT greater than $12 million, request Major New funding, and add capacity to a transportation facility must come before the TRAC. This definition includes all new interchanges proposed for economic development or local access, any significant interchange modifications, bypasses, general purpose lane additions, intermodal facilities, major transit facilities, or Intelligent Transportation Systems (ITS). Projects eligible for TRAC funding typically include capital improvement projects that improve capacity or reduce congestion such as the following: adding an additional lane on a state highway or interstate; adding an additional lane on bridges; new interchanges; new facilities that bypass congested state highways or interstates; new rail lines for public transportation; capital cost for ITS facilities; and intermodal port and rail projects. 4.  Projects that are not eligible for TRAC funding include: widen a road from 10-foot lanes to 12-foot lanes; purchasing buses or other rolling stock; turning lane improvements; resurfacing projects; local road improvements or bridge replacements; or projects with a total project cost under $12 million.  The TRAC application funding process is open from May 1 to May 31, and TIDs are eligible for TRAC funding.

The U.S. Department of Transportation Better Utilizing Investments to Leverage Development or BUILD Transportation Discretionary Grant program provides a unique opportunity for the U.S. DOT to invest in road, rail, transit and port projects that promise to achieve national objectives. Previously known as Transportation Investment Generating Economic Recovery, or TIGER Discretionary Grants, Congress has dedicated nearly $7.9 billion for eleven rounds of National Infrastructure Investments to fund projects that have a significant local or regional impact.   In each competition, U.S. DOT receives hundreds of applications to build and repair critical pieces of our freight and passenger transportation networks. The BUILD program enables DOT to examine these projects on their merits to help ensure that taxpayers are getting the highest value for every dollar invested.  The eligibility requirements of BUILD allow project sponsors at the State and local levels to obtain funding for multi-modal, multi-jurisdictional projects that are more difficult to support through traditional DOT programs. BUILD can fund port and freight rail projects, for example, which play a critical role in our ability to move freight, but have limited sources of Federal funds. BUILD can provide capital funding directly to any public entity, including municipalities, counties, port authorities, tribal governments, MPOs, or others in contrast to traditional Federal programs which provide funding to very specific groups of applicants (mostly State DOTs and transit agencies). This flexibility allows BUILD and our traditional partners at the State and local levels to work directly with a host of entities that own, operate, and maintain much of our transportation infrastructure, but otherwise cannot turn to the Federal government for support.  The U.S. DOT BUILD program has $1 B available in 2020 and the application deadline for TIDs and other entities is May 18, 2020.

The month of May presents multiple state and federal funding opportunities for Ohio’s TIDs that could define success for the organization and their region in the coming years.